The Art of the mini-hurdle Part 1 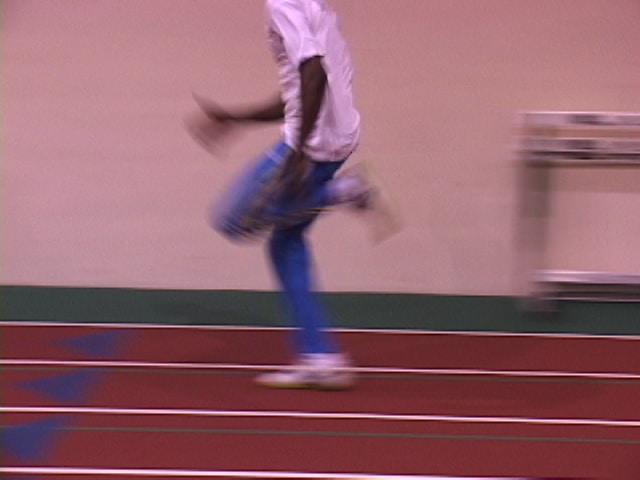 Running drills. Everyone does them but why?

For me, a moment of entertainment before and during a track meet is to watch all of the different athletes go through their series of drills their coach has selected for them.

I am always amazed by the precision some teams have as they lock step through their series of A and B skips. Some of them are as good as the models in Loren Seagraves’s Speed Dynamics video from back in the 90’s. It was an important video and broke the mold of older drills and I think helped push the concept of Dynamic warm-ups.
I was one of those coaches who wore through their VHS tape having athletes even dive into the realm of the crazy skips with the leg coming out to the side. I think they called it a C skip. And that was not the last drill video that I bought. I usually bought anything new and tried everything.  But, most of the time, I really didn’t see much of a change in my athletes.

It wasn’t until I hit Frans Bosch’s Running DVD. Bosch had his own series of videos. His video was different because on side two, he had a purpose for the drills, or when they are appropriate. I loved the drills. I like how they really focused on the timing of a sprint.

In this position, the knee has a chance to raise to its highest position (perfect toeoff).

It also gives the center of mass time to travel to a point where the swing leg doesn’t land prematurely and cause deceleration.  If the athlete is late in the gait, (late in gait)

the knee will be behind and there will not be enough time in the cycle for the foot to land in a proper position. With the added contact time, it often forces the runner to push his run, which creates improper hip position and a “ Long leg” in back (Long leg).

As Peter Weyand proved legs only have so much time to re-position. With the limited time in the air and a leg that is too far back, the rear leg will become late and the cycle repeats. I have never seen a fast athlete, boy or girl, who runs late. Likewise, I have never seen a slow person run with proper timing.

Bosch explains that this is a common problem with runners. And if you follow his DVD, he has drill to solve the problem. The mini-hurdle run. The placing mini-hurdles at a set distance, I can force and drill an athlete into perfect timing.  This video shows an athlete running  that I have never worked with before. As he runs across, watch for the trail leg. My mark is to see where the knee is in relation to the glute. Ideally, the knee stays underneath his glute when his to is coming off the ground. This athlete’s foot and knee extends too far back which cause his pelvis to rotate forward (look at the shape of his shirt) and a long push. He is “late in the gait”.

I set up a series of 8 hurdles that are 6 inches high  at a distance of 1.5m apart. I then asked the athlete to run through. I did not give him any cues or coaching, just run through. Notice the immediate improvement on his timing. Suddenly, his timing was much better. His knee drive was improved, but more importantly, at midstance, his knee was in a much improved position. It gave him the opportunity to have proper form. I would ask him to not lead with his toes on contact and tell him to squish bugs when he runs. But, part of the problem is his shoe selection. Nike Frees have a high drop, 14mm. often times, athletes wearing them tend to hit with their toes first and not midfoot. (So much for the barefoot/minimalist shoe from Nike. Marketing over matter). What a great drill. I can change a runner’s form without any cues. With repetition, it becomes their Gait. To me, this is my basic drill. Without this relationship an athlete can rarely run fast. And this drill gets the job done.  As for other, more popular drills, like all of the high knee drills, are they worthwhile if the timing is off. The knee will never make it. If the pelvis is rotated forward from the extended push, the hamstring will never have time to work if the pelvis is too busy rotating. This drill forces good form.

From here, I build variations on the drill. I increase the distance in between hurdles and try to keep the same relationship. I have a mark for 1.7m, 1.9m and 2.1m. I figure if I can keep the same form and push the runners to go further, I will force them to increase vertical force into the ground for top end speed development. But it is important to film from the side so you are not training the athlete to over stride. Most athletes are so driven to make it to the longer distance that they forget the purpose of the drill. But, my faster runner can make the 2.1 without breaking form. I have found that the shorter distance (1.5-1.7) at higher speed have been more effective for my athlete’s however. I am more concerned about the rate of force in a vertical scenario.

I usually use8-10 hurdles made of 1/2inch PVC. We do these every day we practice. We make it part of our warm-up cycle. Athletes will go through 6-8 times. We tell them to go through at 80-90%. And concentrate on “squishing bugs” and fast repositioning of their knees.

If you are looking for a drill that actually has an impact on a runners form. I don’t think a coach can find a better drill than the mini-hurdle run.